The Honolulu Strategy: A Global Framework for Prevention and Management of Marine Debris 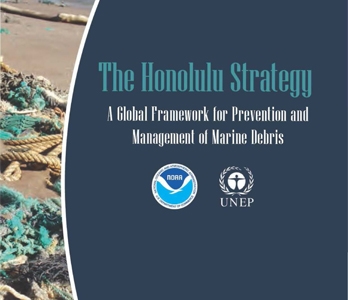 The Honolulu Strategy is one of the key outcomes of the Fifth International Marine Debris Conference (5IMDC) held in Honolulu, Hawaii, 20-25 March 2011.

It is a framework for a comprehensive and global effort to reduce the ecological, human health, and economic impacts of marine debris globally.

The Honolulu Strategy is a framework document. It does not supplant or supersede activities of national authorities, municipalities, industry, international organizations, or other stakeholders; rather, it provides a focal point for improved collaboration and coordiation among the multitude of stakeholders across the globe concerned with marine debris. Successful implementation of it will require participation and support on multiple levels—global, regional, national, and local—involving the full spectrum of civil society, government and intergovernmental organizations, and the private sector.

This results-oriented framework consists of three goals and associated strategies (see table below) to reduce the amount and impact of marine debris from land-based and sea-based sources and marine debris accumulations. The Fifth International Marine Debris Conference, in March 2011, catalyzed development of the Honolulu Strategy. Input from conference participants and stakeholders around the world was solicited and incorporated into development of the Honolulu Strategy.

The Marine Litter Network was developed for the global marine debris community to monitor progress on the implementation of the Honolulu Strategy across multiple programs and projects and to share information, lessons learned and tools.

The Honolulu Strategy can serve as a:

For example, the US government’s National Oceanic and Atmospheric Administration (NOAA) is using theHonolulu Strategy to align its programs and measure outcomes through local and state-level actions, such as the Hawaii Marine Debris Action Plan.